The SAM Pattern is an alternative to more well known architecture models like a Redux architecture or MVC. It goes back to Jean-Jacques Dubray and his blog post Why I No Longer Use MVC Frameworks. It is also presented and explained in the last chapter of the book Front-End Reactive Architectures.

I discovered this pattern during my search for a frontend architecture, which provides a clean separation of the business logic from the view. Considering Redux, you can place some business logic into the reducer. The redux style guide recommends placing as much logic as possible in reducers. In many cases this approach is not possible, since the reducer is a pure function that is receiving the old Redux store and the dispatched action and computes the new store out of it. Hence, the reducer can not handle an API or any other sort of asynchronous process.

It is my conviction that fronted components are the wrong place to store complex business logic, which is handling asynchronous events. In addition, the reducers of a Redux store are not capable of it. Commonly a Redux Middleware like Redux Observables, Redux Thunks, Redux Saga or Redux Logic is introduced to handle this. But this approach is using a heavy machinery, introduces a high level of complexity and depending on the choice of the middleware it might still lack some of my desired features like:

All of my desired features can be implemented by applying the SAM pattern. And it can be accomplished using pure JavaScript or TypeScript, we don’t even need to use React. However, I continue to use React with this approach, because of its virtual DOM and also due to its wide distribution with a lot of useful components being available.

The reactive loop in the SAM pattern

The cycle of interaction and re-rendering of the App is called the reactive loop. It summarizes in the following steps: 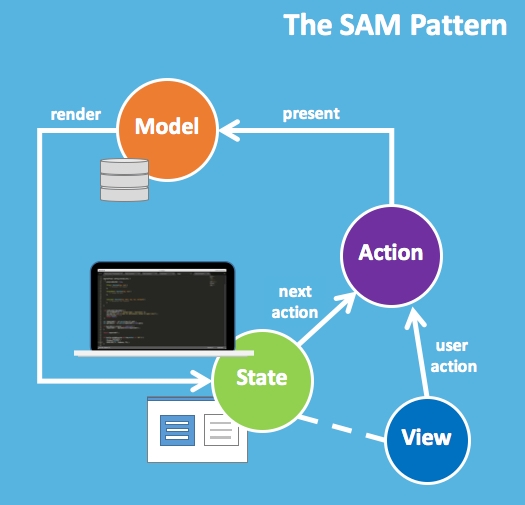 The reactive loop in the SAM pattern

A sample implementation SAM for a browser game

I picked the Towers of Hanoi as a sample application to implement, while following the SAM pattern. To improve its usability, I implement the user interaction with drag and drop. Since I want to focus on implementing the SAM pattern, I use an external library for the drag-and-drop interaction, which is react-dnd.

When you try the Hanoi game above, you realize is the app can be in three fundamentally different states, displaying non-related screen:

Hence the app carries a global state, which allows to assign it to one of those three states:

This reflects the following intent types:

Check out the SAM Hanoi Repo on my Github account to access the full source code of the app. While I don’t want to explain every detail, I still want to remark on the most crucial parts:

While I visualize the reactive loop of the SAM pattern in a flowchart, I follow the naming conventions of the directories and function/parameter names in my code:

The model persists the data in a mutable object that is updated by the models render function. Specifically, the typization of model.data reads as:

Here the present function from the model is processing the actions proposal’s and updating the models data accordingly:

Subsequently the state defines the semantics of the model, it tells the model's present function, how to interpret the data. It is using pure functions which evaluate the model's data:

The view as a result of the model

Eventually, the model derives the stateRepresentation in a declarative way from its data:

In this step, the stateRepresentation implements different views, which represent the different screens of the app:

It contains a display function which is injecting the derived representation into the DOM.

Next to this, the render function executes the nap function to check if any other action should be dispatched as a consequence of the updated model’s data. In our case, it checks if we solved the game after each move and in this case, it sets the game’s status to ‘SOLVED’ state:

This closes the reactive loop and finishes this sampel implementation of SAM.

It wanted to understand how the SAM pattern works under the hood. For this reason, I decided to implement the pattern from scratch in favor of using a framework, like Ravioli.

However, the current version is cross-importing the components. I think in a clean implementation, I should avoid this by using dependency injection. I leave this for a later iteration of this app, and probably for another blog post.

About asynchronous event handling with JavaScript and TypeScript. I'm showcasing the potential of rxjs with a very first and simple example which implements drag and drop.

I discuss here a famous Solidity exploit and to which extent this exploit would have been possible with s Smart Contract written in Paritys ink!